Since the days of Battlefield 1943, (and even earlier, if we go back to Battlefield’s PC-only origin), the “Kill-Death” ratio has long ruled the bombed-out wastelands of the Battlefield universe without pity, and rightfully so. Fighter games were built upon the fundamental duality of Killing versus Dying. Thus, whether it is represented in the brutal, graphic harmony of games like Street Fighter and Mortal Kombat, or in the head spinning, make you want to vomit, flight-fighters like the immortal Red Baron franchise: Kill and Death are Yin and Yang, the essence of all fighters (see Figure 1).

But times are changing. There are a lot of ways to make BOOM Salad, and the role of Kill versus Death, while still the KING of the First Person Shooter (FPS), is no longer adequate as the only assessment of a player’s effectiveness on the Battlefield, not since the emergence of what I call the “killing machine (see Figure 2).”

This type of player is easily represented, and perhaps unfairly so, by the sniper lying camouflaged by rock, 400 meters away from the frontlines, loading up on their Kill/Death and Spotting scores. He may die once a round, but his Kills will be way up there. Even more deadly, are the jet or helicopter fighters who have no airborne rivals and populate servers where the infamous twins, IGLA and her sister STINGER, are banned. These, “killing machines,” be they on the ground or in the air can dominate a round-squad score without blinking their eyes (and I mean that literally, see Figure 3).

“Killing machines” may have high Kills versus Deaths but their contribution to the winning or losing, my definition for “Battle Effectiveness” is suspect. This leads us to the notion of quality kills and, even more controversially, quality deaths.

It cannot be disputed that killing a player and thereby reducing the number of combatants on the enemy’s team, in addition to taking a ticket, is NEVER a bad thing. But some kills do more good than others; and it is my contention, so do some deaths.

Imagine you are a Combat Medic defending Bravo and just as you revive two of your team and deliver a medic bag, you are killed. But because of your sacrifice one in your team survives to disarm the bomb, and your team wins the round. I call that a “quality death,” and there are numerous other examples I could refer to involving all of the various loadouts.

Unfortunately, there is no direct way to measure either quality Kills or Deaths. Clearly, Skill has something to do with the matter, but it still seems too heavily weighted on Kills v. Deaths to be reliable. To find out how effective a player is in a round, we need to decouple the Kills and Deaths from the final score. What’s left over is comprised primarily of points the player earned from ribbons and medals, rewards for going above and beyond to help the team win.

Measuring these activities apart from Kills and Deaths reveals a very different picture of a player’s overall performance, their “Battlefield Efficiency.” The formula is simple: add the number of kills and deaths at the end of the round, multiply by 100, and subtract from your total score.

The remainder is what I call the, “Battlefield Efficiency Rating  (BER),” which when used in conjunction with the total Kills and Deaths, gives a more complete view of a player’s effectiveness during a round. The table below is based on a recent game in which my Kill versus Death ratio was better than the majority of my teammates, and yet, as my BER suggests, I wasn’t very effective. 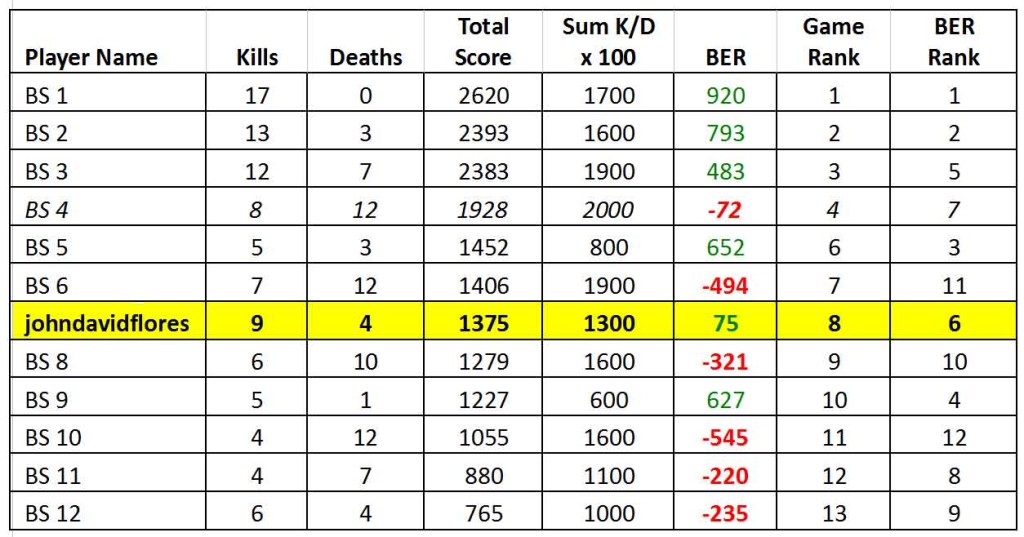 Without the distortion caused by Kills and Deaths, a new order of player effectiveness emerges, which can either contradict or affirm a player’s ranking, as in the case of our team’s highest scorer: BS 1. Their Kills/Deaths and BER confirm their position at the top of the list. But once you get past the first two, the complexion of the leaderboard begins to change. A good example is the score and rank of player “BS 4.”

Though BS 4 was ranked fourth best in the round, their BER was actually negative, which suggests the quality of their Kills and Deaths was low overall. Their BER rank was therefore seventh. Likewise, though my K/D was above average, my BER rank (sixth) indicates I could have done much better. Given that half of our teams’ BER were negative, it is unsurprising that we lost this round.

The BER is therefore, not a replacement for total score or the Kill-Death paradigm on which the FPS is founded, but rather an enhancement. Since ribbons and medals are given for the number and variety of kills during a round (see Figure 4), the BER still retains the shadow of the K/D paradigm while at the same time giving more focus to the other aspects of a player’s game that make them not just a “killing machine” but a highly effective “killing machine.”