To suggest that it is because one is inclined to violence or aggression would be far too simplistic given the pro-social, pro-empathetic, pro-sympathetic functions intentionally designed into the software responsible for creating and maintaining all aspects of play. Moreover, it does not agree with our numerous, first-hand experiences playing an extremely violent video game with dozens of players simultaneously (see title video).

For example, within a month after opening our first Battlefield 4 server on PS3, we found ourselves inundated with friend requests from children between the ages of 9 and 14. We befriended all of them and quickly discovered that not a single one had a violent or aggressive motive in playing. We also found that their appreciation for the absurdity of the violence, well demonstrated in the ability to blow themselves up repeatedly and without fear of actual harm,[10]  was a significant factor in their choosing Battlefield 4 over other first-person-shooters. Perhaps of even greater significance is their affinity for the various functions that allow for greater pro-social, pro-empathetic, and pro-sympathetic engagement.

By this we mean, that in the development of their Meta for Battlefield 4, [11]  these young ones have embraced aspects of the game, which allow them to become healers and saviors of their fellow combatants. For instance, it is not uncommon for one or many to assume the role of what is known as a, “Combat Medic ,” in which the emphasis of play is on the self-sacrificing role of medical savior, responsible for keeping their teammates alive.[12]

Because their focus is not on killing, Medics die more frequently as they work harder to revive and survive their team to a win (see video below).[13]  In this way, the violence and aggression of the game are counterbalanced with a positive and gratifying alternative that promotes and reinforces pro-sympathetic behavior in a pro-social context. Combined with other features that enable greater interactivity online, like real-time audio connectivity with teammates through headphones, only increases opportunities for these types of behaviors to be expressed and rewarded.

Another important reason why these young ones play is due to the proximity they have in playing with others considered as the best in the world. By this we refer to the numerous instances in which it is possible to play against, or alongside, players who have achieved worldwide recognition for their expertise.

For example, BOOM Salad recently announced their official sponsorship of the Battlefield 4 player known as KING-DYLAN666.[14] He is, arguably, one of the best Battelfield 4 players in the world on PS3 and PS4 (see Figure 2). For many online players, the opportunity to play alongside local legends like the KING, and perhaps even more significantly, being able to play against them, and survive, is like a medal of honor, and not just for the young. It is this kind of accessibility to the “heroes” of the game that makes it, and other similarly competitive video games attractive and compelling to both the new and experienced player. 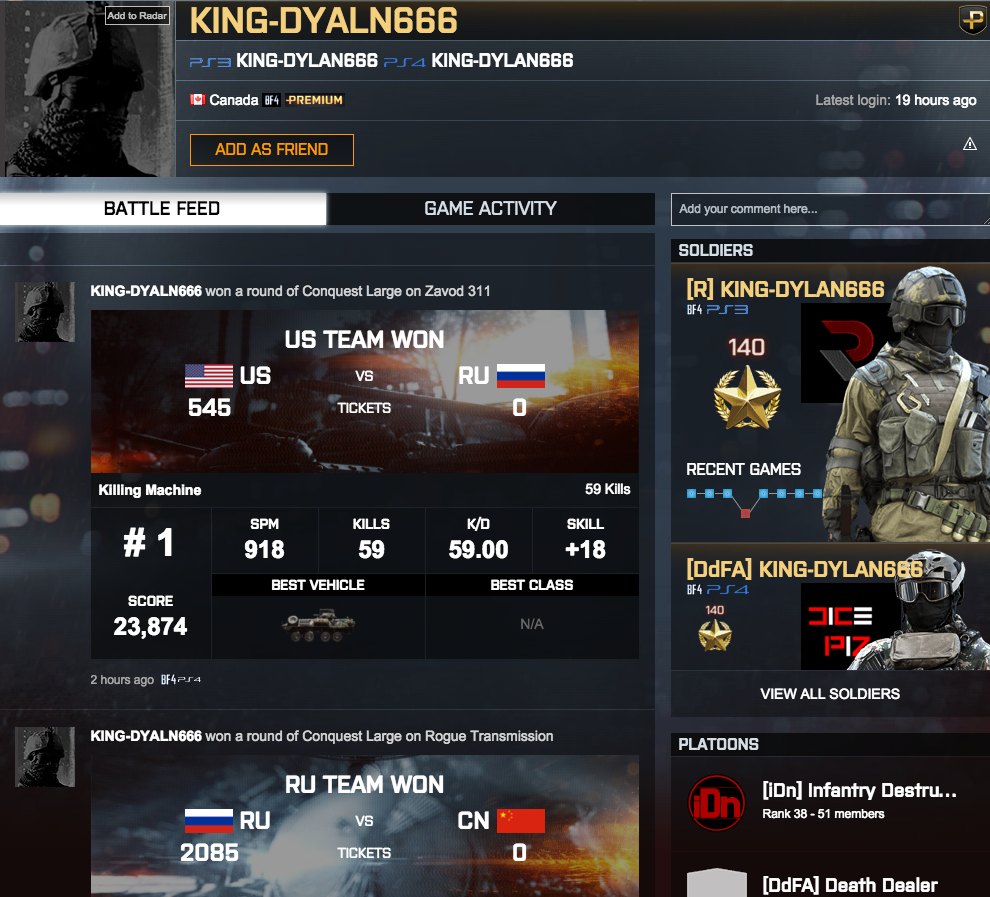 Thus, we have found that the motives and underlying reasons for playing games like Battlefield 4 are more varied than the superficial violence and mayhem for which they have long been stigmatized. Moreover, we’ve learned that these games often reveal and re-enforce behaviors widely considered beneficial to society, such as sympathy for strangers, empathy, self-sacrifice, and loyalty. And yet, this important aspect of 21st video gaming has been more or less ignored by those in the medical community who have declared all video games with violent depictions as dangerous to society and, especially, to younger players.[15]

As a result, over the past 20 years a medical myopia has developed, in that the focus of medical research, as it relates to video games with violent depictions, has been predominantly centered on violence and aggression,[16] and not on any of the pro-social benefits that these games represent. Of even greater concern is how the medical community has contributed to the stereotyping and stigmatization of an entire sub-culture of society whose membership transcends all economic, social, ethnic, racial, religious, and gender distinctions.

By labeling all games with violent depictions as, “harmful,” and implying that those who play such games with frequency and regularity, are nothing more than serial killers and mass-murderers in training, the medical community has not only contributed to, but, in many ways, led the charge in formulating and promoting an unfair and inaccurate stereotype founded on research results that are now recognized as dubious and misinformed.

It is for these reasons, and many others, that BOOM Salad calls for an END TO THE STIGMATIZATION AND MARGINALIZATION OF VIDEO GAMES WITH VIOLENT DEPICTIONS AND THOSE THAT PLAY THEM.

The Adventures of Chiro and Urg: HALLOWEEN SPECIAL!!! “Killer Surgery.”